After the CSC we had out rudder alignment returned to where it should have been (thanks Rob, Matt G, Matt S, Craig, Gordie and all who helped). Soooo much better.

The Forecast for Kapiti-Chetwodes starting at 6am Waitangi Day was for a southerly front dying out.  We'd anticipated a nasty harbour exit in the rain, against tide, 30 knots southerly, and swell, in about 12 degrees. It came through right on schedule with some force just after 4am as we all left home for the marina, gusts of up to 50 knots along the south coast and rain showers.  Start was to be at 6am but delayed due to a berthing container ship to 6.30.

Things started getting better.  The rain stopped.  We got a good start and unwrapped the Fractional Zero off the line, worked really nicely for us and we led across Evans Bay. 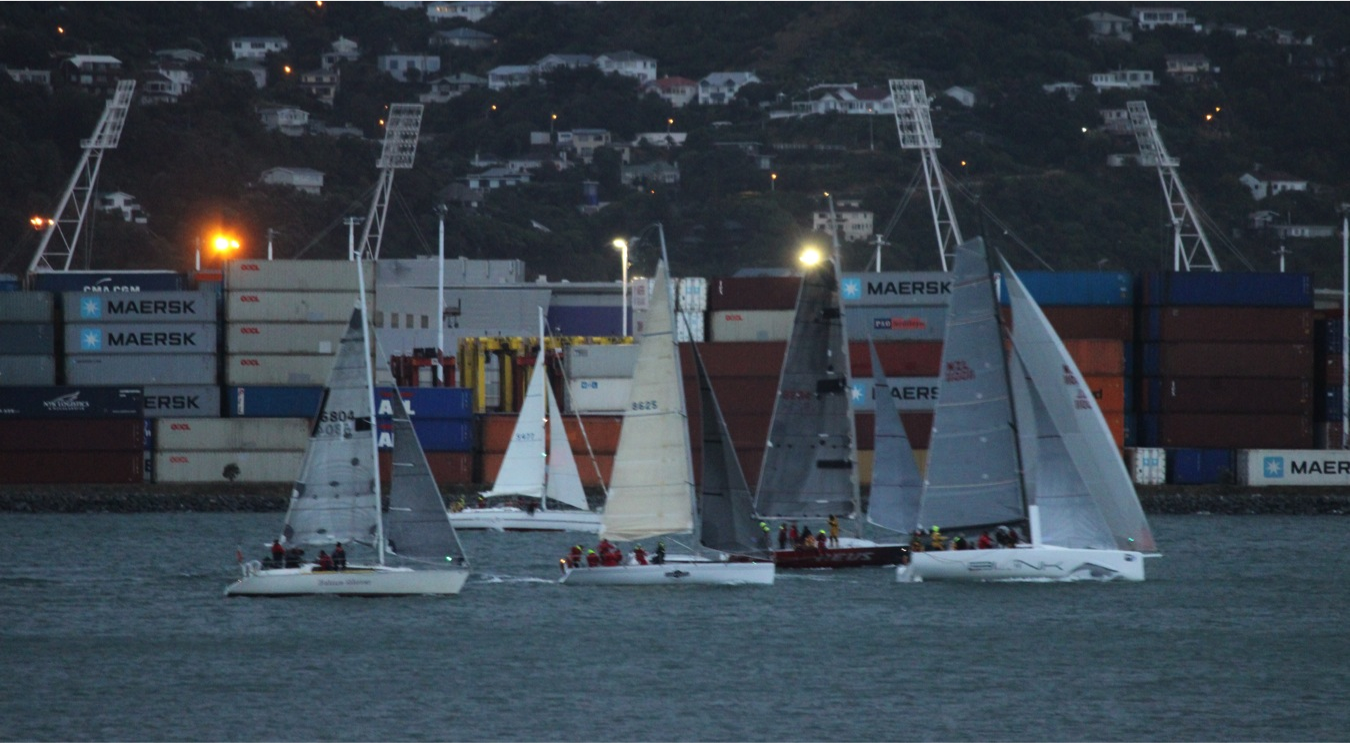 Like many of the boats we liked the pin end, Wedgetail and others nearer the middle, not in this pic

Then the FR0 took us a bit low, so we lost a bit of our lead in height and Wedgetail made good use of that, leading us out of the harbour - which wasn't as rough as we'd anticipated - by about a minute

Unfortunately for us the next leg was almost hard on the wind, so we couldn't crack off much as we'd have liked, but that angle suited us slightly better than Wedgetail and we regained the lead.  Not as fast as usual across the south coast, only about 8-9 knots, but current was with us so SOG was usually over 10.  Next were the rips, Sinclair was again less than we had anticipated,

but the Karori rip was bigger, which had bowman Matt alternately airborne and submerged while he prepared a downwind sail for the ride north to Kapiti. Matt was probably the wettest of us, but we were all a tad damp.

At Terawhiti we were lulled by the strong current (5-7 knots) going our way to think that the breeze was only in the upper teens or low 20s. So we went for the A2.

Which was awesome until we crossed a tide line out of our nice stream.  Both the true and the apparent wind increased significantly, now high 20s, and suddenly it was clear we had too much kite on.  After a couple of very restful lie-downs we got the A2 below, granny-tacked, and changed to the A6.  Which was great...


we cruised along with boat speeds consistently between 17 and 20 (well, that's what the speedo said, although it may not have been in the water all the time!) and extended on the fleet.  We had got the layline just right, gybed the A6 next to Kapiti island after 4 hours of sailing (52 nm rhumb line to here), and then dropped it for the 40 nm reach to the Chetwodes   This started windy and rough, 25+ knots on our beam with waves to match,
but got progressively lighter as we got further west.


We'd been trying to get height to get around the Chetwodes clockwise, like we always had.  As we started to get close, Craig actually read the SIs carefully and noted that we were supposed to round *anticlockwise*  Oops.  We'd been sailing too high and too slow for several miles, should have had a bigger sail on. Never mind the disturbing realisation that it would have been a much more costly mistake had we actually gone around the wrong way.

Just after this, we realised we'd thrown our belts of the canting motor / 24V alternator and they'd need to be replaced before we next had to cant.  i.e., very soon.  So there was a not very pleasant, messy, hot, rushed, knuckle-skinning engine-bay job to do.  Some expletives were utilised.

Then we just had to ghost through the horrid Chetwodes wind shadow which seems to last forever, before tacking upwind towards Point Jackson and the finish line.  Near Jackson, with a 10-15 knot breeze, lots of daylight left, and a little over 6 miles to go, we thought we'd have a good chance of taking a big chunk off the record time.

Yeah, right -- not long after rounding Jackson, with the finish line in sight, we starting running out of wind.  We spent a long time going very slowly, often in the wrong direction, and getting generally frustrated.   We were saved by a few knots of wind on the beam which got us the last mile or so with our masthead zero. 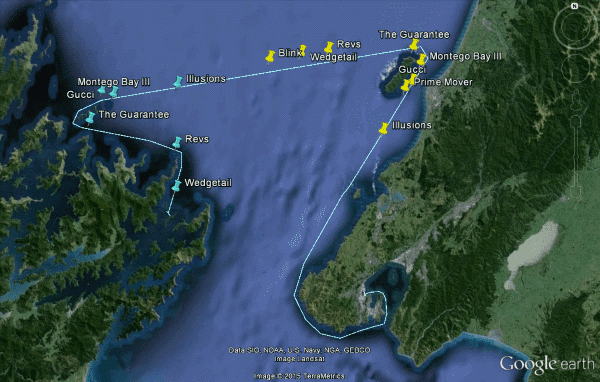 The rest of the fleet suffered more from the wind dropping out than us.  Wedgetail had emerged around Jackson, didn't look very far away, and seemed to be sailing straight for the line instead of having to tack up. We thought that a little unfair.  But they ended up running out of wind too, and finished about 1.5 hours after us.  The Revs team described several slow and frustrating attempts to get around Jackson against the tide before giving up and withdrawing.  The Guarantee apparently sailed past Titi island 3 times, being knocked back by tide repeatedly before withdrawing.  With no breeze available or looking likely, darkness approaching and no favourable tide for 6 hours, several other boats withdrew also.

We had a great evening in the Furneaux Lodge bar, and decided to use the crew fund to buy some warm dry comfy beds there instead of wet sails.  Matt S was so pleased with this arrangement he even went back into bed for his post-brekky cup of tea. 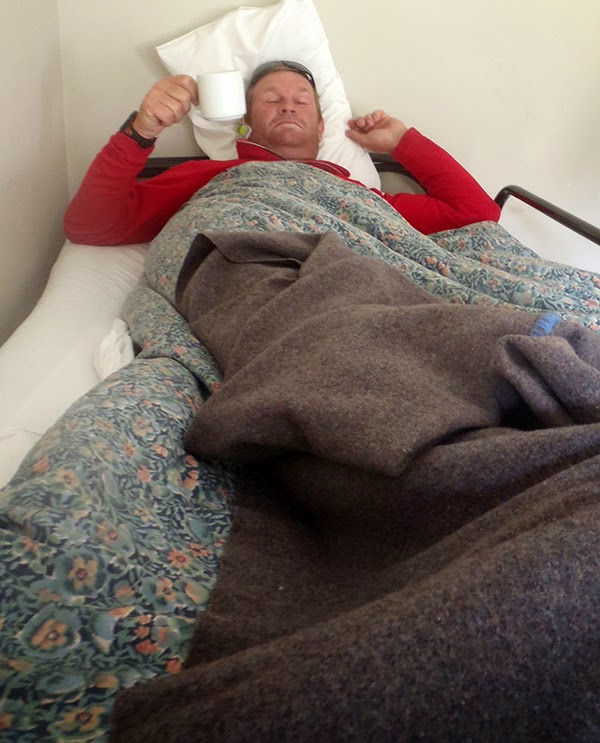 The trip back was very pleasant, Vesna and Jono doing most of the steering, perfect conditions and masthead zero to the south coast, and then a typical 'welcome back to Wellington' 25-30 headwind to get back around the south coast and into the harbour.

Should be some silverware and an official record after this race...
Posted by Tony at 01:00

"We learn by example and by direct experience because there are real limits to the adequacy of verbal instruction"“extreme visual clarity, tunnel vision, diminished sound, and the sense that time is slowing down. this is how the human body reacts to extreme stress.” "I'll go anywhere as long as it's forward."


― Malcolm Gladwell, Blink: The Power of Thinking without Thinking