The forecasts for yesterday's race were wildly varied.  All seemed to agree on northerly or norwester, Metservice up to 30 knots, Predictwind 12-15, Windfinder & WindGuru 20ish gusting high 20s.  And varied is what we got.

We went out and put up the main planning to put a reef in.  Then we decided to go out and have a look at it.  It was OK with full main, high teens mostly, but with the occasional gust in high 20s and one of 30ish.  So we didn't reef.  Just before the start we didn't reef again, despite a few minutes of sustained high 20s, correctly anticipating that we'd be underpowered in the inevitable (relative) lull to follow.

Craig at the back of the Boat and Joerg at the front made a great job of calling the start at the pin, we absolutely nailed it, hit the line on the gun and in clear air we cleared out.  So at the first top mark we had a pretty useful lead, first by a hundred metres or so on Ran Tan and Revs.  Wedgetail, our other big Div 1 competitor apparently had a horror show, over at the start, then several gear failures had them abandoning.  Through the race they were seen to be without at headsail a couple of times, maybe headsail foil problems?
Update: Wedgetail was distracted by lost battens before the start, and broke 2 vectran halyards (jib, and then fractional that jib was re-hoisted on)

We got neatly around the mark, didn't have our kite ready but given how blustery it was, it didn't matter too much, speeds were reasonable even without a kite ...


We eventually hoisted and unfurled successfully ... we headed deep since we were only just above lay line for the next mark and wanted to avoid gybing, so with the apparent wind at about 120° - 140° weren't fully powered up, but again moving along nicely in the right direction


At this point we realise there's a bit of a problem.  The furling line has escaped from it's bungy restraint, come loose, and has fallen in the water, but not before wrapping itself around the furling drum and lower sail during the end of the unfurl.  A brief discussion resulted in a unanimous conclusion that this would make furling at the next mark (now not so far away, and approaching at circa 17 knots) quite difficult.

Joerg had stepped in as bowman, so now stepped up. 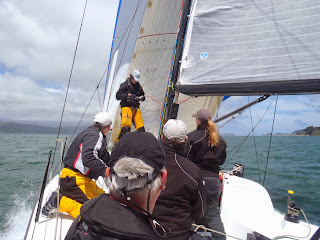 He attached himself to a halyard just in case of trouble and went out on the 1 metre long fixed prod.  That's not such a big deal - yes, there's the occasional sensation of being sprayed with a firehose and it's not really for the faint of heart, but there's a very sturdy bobstay to hook feet onto so you can stay upright.  It was the next bit that was really impressive, another 2.5 metres of thinner, very wet, just as slippery carbon tube, with quite literally nothing to hold on to.  In a gusty 20+ knot breeze.  With the boat still doing 10-15 knots and 80kg on the very very front end of the boat. 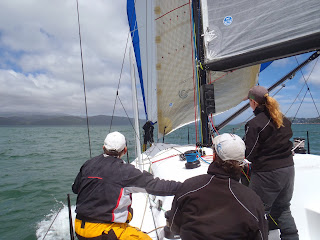 Things might have got very messy at this point, but they didn't.  A discussion from many months ago with Rob about the pros and cons of an even longer prod popped into my head, including one of the factors being how more weight at the front might not be so great.

So, that sorted, we furled the A5 _very_ early in case of trouble furling, and turned up towards the Somes Island mark.  The  next leg was across to Day's Bay and we thought it would be a broad reach.  We debated A3 vs A6, decided A3 just in case we needed to head higher.

It turned out even the A3 wouldn't give us enough height, and we had trouble re-furling so sailed waaaay off course trying to get this down.   Huey organised another solid high-20-knot blast while we attempted this.  Which wasn't a great help.


At the end of the above clip is Ran Tan still heading up to the previous mark, gives an idea of how much lead we had here.  Eventually we got that furled and down too, but had to sail a few hundred metres pretty much upwind to the next mark.  We tacked soon after, again upwind to the mark north of Somes, still ahead but having lost about half of our lead.  The following beat was pretty uneventful except for being headed on the way to a rounding, trying to pinch to get around, and touching the mark.

We went into a 360 turn... didn't bother with the boards, gybed, carried lots of speed into a roundup.  we were so quick through this that the trimmers hadn't had a chance to trim on - but our boat speed was pretty good so I just flipped the boat through the wind and away we went back on course  That was a really quick 360 penalty, thanks mostly to the trick ('acumen' I think it's called) steering system controlling the independent angles of our twin rudders.

We knew there was a tight reach to the mark we thought we were rounding next.  So we 2-sail reached to it in the now pretty solid norwester.  Good speed, good angle, still some lead left, good times. Only it wasn't the right mark.  Ran Tan, now at a lower angle and powered up in more breeze away from the hills, were suddenly making up a lot of ground.  No worries, here comes the correct mark and we've not lost all of our lead.  We'll launch the A6 again, this time at a nice hot angle, in 25-30.  Here comes that really big ride we've been waiting for, we'll be gone in a blizzard of white water, yeehas and woohoos.  Probably a new Personal Best for Blink, probably high 20s boat speed.  Here we go ...

For the second time we were thwarted by a furling issue.  We didn't see why, but we think there was a contra-roll of the looser foot of the mostly furled sail as it started to unfurl spontaneously in the big breeze.  We struggled with it for ages, staying high so we'd be able to come down once the hyperdrive kicked in.  It didn't, and by the time we sorted things out we were badly positioned, Ran Tan overtook us, sailing a better angle in more breeze.  Getting close to the finish, and wind had backed off where we were, not enough pressure to get us out of second.  Except, wait, here's some...


As you'll see from the vid above, and here, we couldn't quite catch up again, so we ended up second on line, having given away a substantial lead.  Despite the suboptimal second half of the race, we were also, somehow, first on club handicap and second on PHRF.

And that big ride is something we are still looking forward to...

Thanks to Mark H for the great pics and video
Posted by Tony at 21:16