People in Wellington last Saturday night could be forgiven for thinking that the fireworks in the harbour ... 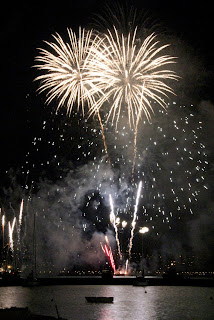 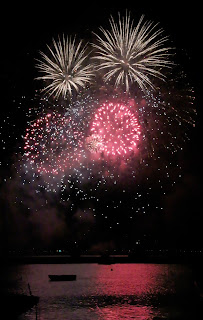 ... were something to do with Guy Fawkes night.  This conclusion was of course naively misguided, since Guy Fawkes was on the 5th of November, and a far more important event occurred on the 9th of November. This was Blink's first offshore, the Brothers Race, with Line Honours for the 12m Shaw design, with Rob himself on board. This was Rob's first sail on Blink except from a very light-airs inaugural outing in August. 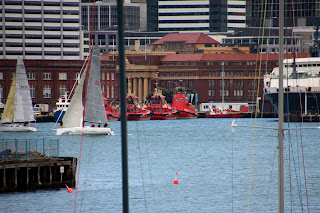 Our offshore crew numbers are limited, so we could only take 9 people, and with Rob coming down some of our regulars had to stay behind, including Vesna with her arm in plaster.  Hence she was able to take the great off-the-boat pics. 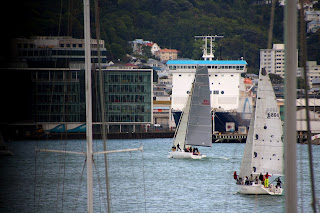 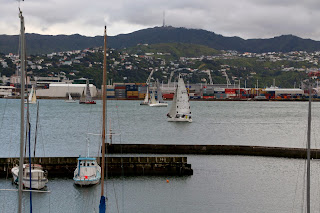 We'd had problems with our furling setup the night before the race,  the top-down ones in particular needing some fine-tuning, so we elected to free-fly the kites except of course for the Code 0.  As it turned out, the Code 0 off the line (that we, like almost everyone else, were very late for) was an excellent choice and we shot away from the rest of the fleet who stalled out in Oriental Bay's typical fickle southerly conditions.  Ran Tan started to catch us on the reach across Evans Bay, we carried our  C0 a bit far and they sneaked inside us 2-sail reaching.  Lead change number 1. 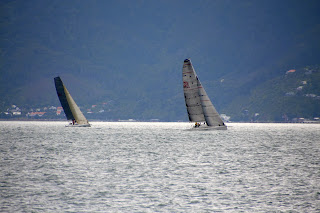 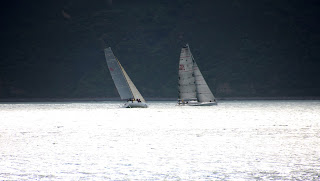 Then we started chipping away at Ran Tan's lead, eventually catching them and overtaking at Moaning Minnie.  Not only does Blink rip downwind, but it seems she goes upwind pretty well too. 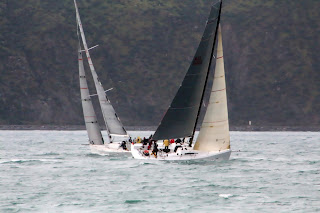 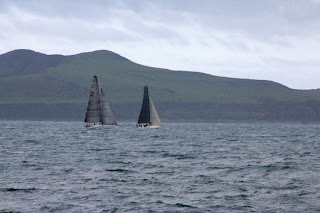 So we led Ran Tan out of the harbour.  Lead change number 2. 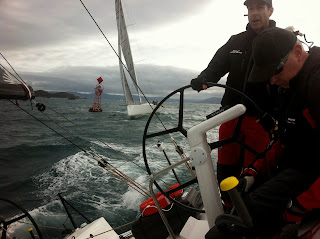 The tight reach along the south coast saw Ran Tan get forward on us to lead us around Sinclair Head. Lead change number 3.

But then we got the Code 0 up again, and crept around Ran Tan again by the time we got to Karori light, lead change number 4. 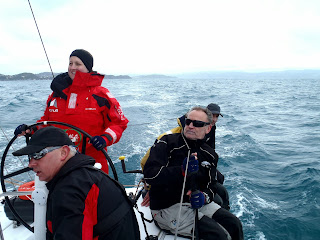 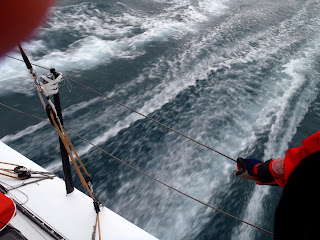 They were north of us, however, so only needed to put a little extra speed on to pass us again.  Which they did.  Lead change number 5.

We had our A2 up again by now, so got going downwind.  We gybed in towards Terawhiti, and out again and headed for the other side.

We could see the compass bearing to Ran Tan decreasing as we regained the lead.  Change number 6.  We rounded the Brothers 12 minutes ahead of Ran Tan, and then dealt with the only tactical dilemma of the race.

Craig had been running the weather and tide info, along with some very creatively produced guesses as offshore Shaw 12 polars, for a couple of days.  And the courses suggested seemed to alternate between heading straight back east, or putting a tack back in to the south after going a couple of miles on starboard tack from the Brothers.  So we did put a tack in.  Seemed like a very rational idea at the time.  And we probably didn't sail quite as low and fast as we should have on the way across after that.  So Ran Tan tacked off the North Island coast and crossed us on port by a few hundred metres.  Lead change number 7. 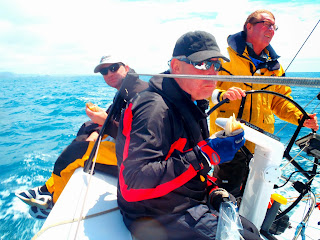 But once back on the wind, we were back in the game, and then had the opportunity to lee-bow Ran Tan and force them back away from shore.  That paid off handsomely, lead change number 8, and we built up a pretty decent lead after that.  Then we got around the south coast as well as we could, Code 0 again between Sinclair and Minnie, then A2 into the harbour, pretty much all the way to the line.

Well, pretty much.  There was discussion about how to handle Kau bay with the Halswell finish bearing at the other end.  With plenty of east in the southerly, we'd hoped to carry the kite most of the way to the line.  As it turned out we needed to lose the kite about halfway across, as we got gusts coming from the southwest down the hill.  No problem if we'd had a furler attached, we didn't.  No problem if we could bear away, but we couldn't as there was a row of 5 tinnies all anchored and fishing exactly where we needed to go.  So: problem.  Kite in water, only bit of chaos in the whole race, within sight of the line.  We didn't catch any fish, but not for want to trying.  Apparently salt water is an excellent way of preventing mildew on sails, if so our A2 is mould-safe.

We didn't take many pics on the boat, but did run the time-lapse camera and will splice in some of the other video we took... to follow.
Posted by Tony at 21:19