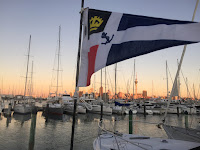 The lead up the Fiji race was an epic adventure in itself.  Getting the boat ready from Cat 2 to Cat 1, filling in Customs forms from NZ to Fiji; from Fiji to NZ (and did we mention more forms if you change crew from Fiji to NZ), all in duplicate.

Gordy and Craig had also spent an enormous amount of their time helping to do various jobs on Blink as well as donating their time to do a two handed delivery from Gisborne to Auckland when we had to jump off for work.

https://www.youtube.com/watch?v=dqB0iI75bUo
Some video clips from the delivery trip to Gisborne.  Dolphins and Dancing ...

To get to the start line was a magnificent achievement and what was to follow was just as exciting. 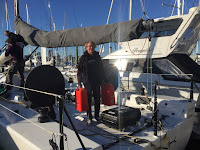 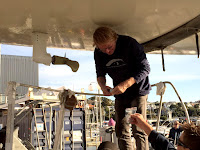 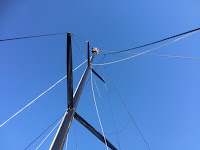 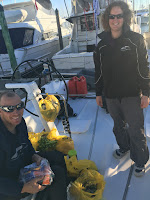 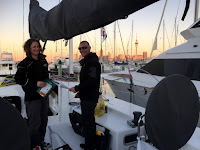 Our 4 June 2016 11am start was a slow one breeze wise.  We were overtaken by most of the fleet in very light and shifty air.  It was interesting that with all of the professional local sailors on pretty much all of the boats (Blink probably the only all-amateur crew?) there were a huge variety of ways out of the gulf. 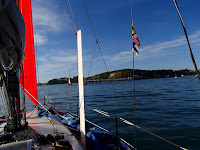 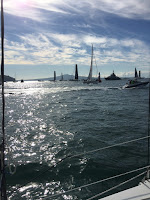 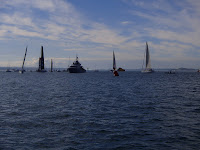 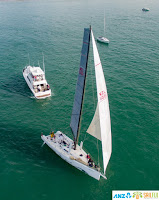 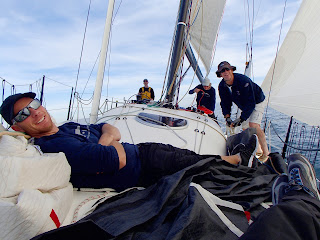 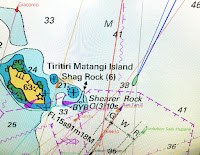 https://youtu.be/6KDf0ByxaqI
Nice video Clip of Colt swapping the gear over at the end of the 3.5m prod. 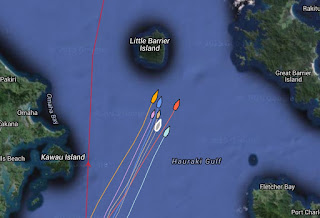 Between the barriers - starting to catch up with some consistent breeze, that's Blink highlighted in grey

We didn’t worry too much about Vodafone, the luxury 88 footer (complete with spa bath) Shaman, the Volvo 70 Giacomo or the 52 footer Miss Scarlet; they were all going to beat us, especially as the forecast favoured faster boats who would avoid the NE header at the Fiji end.  We wanted to stay ahead of Crusader having been ahead of them in the 2015 Crewed Central Triangle Race when they overtook us in a drifting match.  We also thought we had a good chance against Hupane (the Class 40) but with a professional crew and their perfect angle of sail, we thought those chances were OK at best.  We weren’t sure how we would compare to Anarchy (YD 37); we thought we ought to be a bit quicker, but ...?

What we did do is  focus on sailing our boat well and hard with people that we love to sail with; our regular crew plus Craig Partridge who built Blink for us in 2013. Craig is a hell of a nice bloke, a competent sailor and we thought he would fit in nicely - we got it right.

We had worked on a strategy of going east and saving our fun tokens for a bit later.  Craig Shearer (our Navigator) had carefully downloaded numerous models of wind data and in discussions with our Skipper Tony, had picked a course for us that took Blink as the most eastern boat in the fleet. 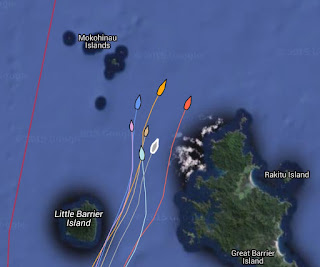 Starting on the eastward plan.  Class 40 Hupane spends some fun tokens early - we were hoping too early - and with kite on crosses to leeward just behind us 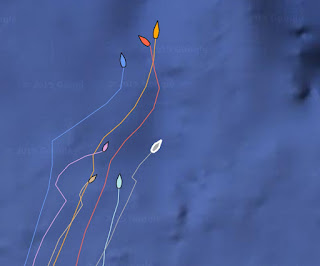 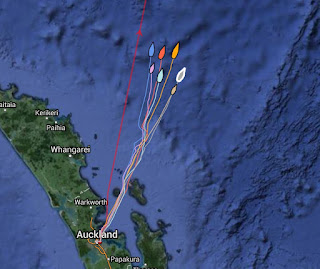 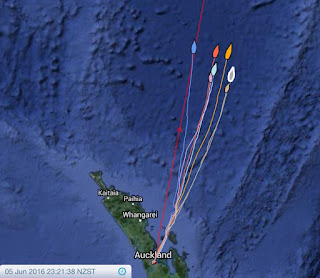 2 days in -- Blink is the easternmost boat.  Leverage that was to pay out nicely at the end when we could tight reach at 11-12 knots to the finish, at the same time Ran Tan and Hupane would be sailing upwind at 9-ish knots

As the breeze picked up and the TWA looked a bit wider, we thought it could be convivial to try a different sail combination to the J2, out came the FRO.  Craig Shearer has a fascination with the FRO and at every opportunity an enthusiastic “time for the FRO” would belt out from the nav station after watching the wind clock to the right direction (or so we thought).  Up it went and we made good speeds (circa 19 knots) , but towards Noumea.  No good.  Take it down and tie it down on deck for later.  This occurred three times during the entire race until the crew belted out to Craig “NO FRO BRO”.


Two and a half days into the race, we lost our wifi connection and GPS puck - we hadn't anticipated quite how wet everything would be after a couple of days, huge amounts of spray and occasional solid water across the deck, and small leaks here and there that don't matter on short races, plus condensation inside all started to add up.  This meant that while we could plot our own course manually, we couldn’t plot where everyone else was, nor could we download new forecasts   This was both exciting and disconcerting as we had some unfinished business with Crusader and wanted to know where they were.  We thought our approach of staying east would mean the boats that had gone more west, would end up with more wind on the nose.  We consoled ourselves with this possibility and continued to sail the boat hard, taking out reefs, putting them back in, reefing the J2 to the J3, shaking the reef out, putting it back in etc.    Not the most exciting of sail wardrobes but we made decent speeds just cracked off (10-15 knots most of the time).

In the trade winds proper now - sea state not too bad but between the heel angle and hitting waves, still difficult to move around.  And wet, very wet, out on deck ...
https://youtu.be/-Px8rcT33DI


The wind was somewhere between 20 knots and 45 knots for the entire race except for a couple of light patches that were rather frustrating.   Sea state somewhere between 2 and 4 meters depending on the wind - usually around the 4m mark.  What we were most impressed with as we usually sail in the Cook Strait and Wellington Harbour where the water is cold, is the warmth of the sea.   And it got warmer as we approached Fiji. This was rather a bonus given we were continually wet for the entire race where the only respite of dry and clean clothes lasted about 2 hours on the off watch about two days into the race until the wet weather gear had to come back on for the next watch.  The angle of the boat was unrelenting for any hot food preparation (we had two hot meals where we risked life and limb to boil water).  Using the heads was a mission (bilge water in a bucket or have a crew member catch a wave for you as the water intake was  well, out of the water).  Getting around the boat was a mission too and two of our crew (Kimmy and Colty) on two separate occasions took a fall onto the gimbled stove resulting in bruising for Kimmy and Colty splitting his head open (Vesna most disappointed not to deploy the stapler as it was marginal whether it needed it).  One of our kettles didn’t make both of those falls.  100 miles south of Fiji we encountered a colossal wave.  Colty was driving and said in a rather fractious tone “big wave”.  The wave was enourmous and breaking.  It knocked Blink sideways violently enough that the crew on their off watch woke up and thought we had hit something.  No injuries and no damage - just a reminder of how unpredictable the sea is. 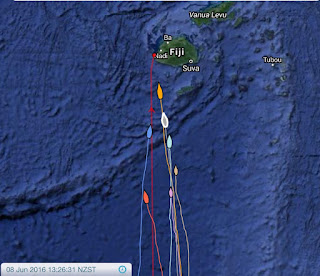 Looking good coming into the finish, at the magic 336° target heading.  Shaman in orange well ahead, we've caught and are overtaking Ran Tan (blue), rest of fleet including the class 40 Hupane (light blue) that are relevant to us tucked in behind. Miss Scarlett (red) has lost forestay so slowed right down


With communications down, we were still unsure of our position and continued to sail the boat hard to the finish despite another light frustrating patch.  We entered the reef at the finish line on our iPhone Navionics software 4 days 17 hours 47 minutes after we started.  We then learnt from the finishing boat that we were 3rd across the line.  We were amazed and rather delighted to have done well.  With the main sail and jib down, we were reminded that we had to deal with the alcohol contraband so out came the rums and beers to celebrate.  Salami and parmesan cheese accompanied said contraband for breakfast as we watched the sun come up on the way to Port Denarau 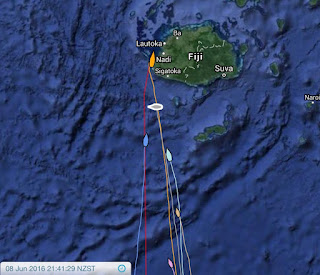 Scary hole about 40nm south of Fiji -- probably cost us over an hour, rest of fleet catching us ... 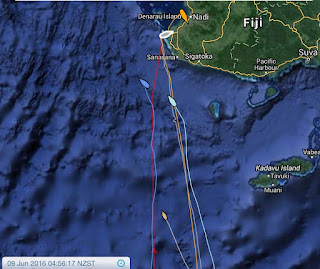 One day into the race, we were reassured when Crusader were also doing the same thing while the rest of the fleet where somewhere between us both and the rhumb line. 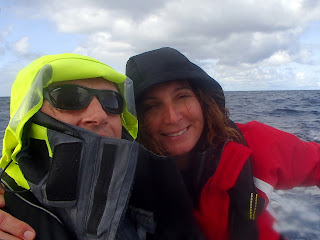 At Port Denerau we received the most incredible reception, all rather humbling and delightful.  A wonderful race, well organised, and all credit to our great crew who are nice, competent, adventurous people and who care about each other and have a winning streak. 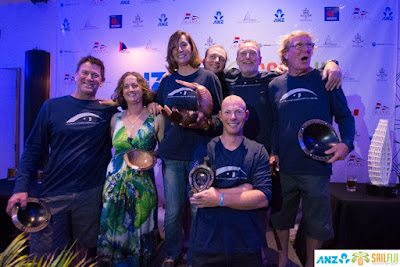 Results were 3rd on Line, 2nd on IRC and 3rd on PHRF.  We also received the Vonu Trophy donated by the Muirs of Wellington for NZ design and build.  A superb trophy to receive with Craig Partridge, our great boat builder, on board.  A wonderful few days followed in Port Denerau with VC Paul Atkins and Matt Perry joining us to celebrate and then help Gordy and Craig Shearer sail Blink home. 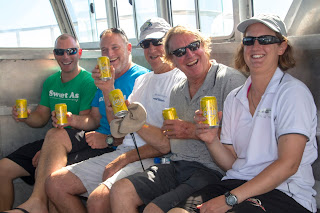 Fiji Gold - on the way to Beachcomber resort for the afternoon...

As we write this, Blink is nearing the top of the North Island and heading down the west coast shortly back to her home port of Welly.

Update 22 June: nearly 8 days after leaving Denarau, Craig, Gordie, Matt P and Paul A get Blink safely back to Wellington 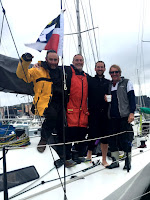