As a reward for our General Handicap 1st place in the RPNYC Xmas Series, we had ordered a 25 knot southeaster for the CSC, although a southerly would have done.  Until a few days out, it looked like a drifting race.  Then it looked like a low 20s headwind.  Craig ran the course through Expedition a day or so out and it thought we might challenge for the record time.  Really?  Uphill?

We had debated for days whether we'd hit the line with the A3 or C0 up, but in the end it was a bit windy so we just 2-sail reached across Evans bay.  In front.  Then we went to pop the A2 and expected to get out of the harbour fast.  But we weren't quick at hoisting and then when we did, there was a nice half-hitch in the furled sail about halfway up.  This clearly wasn't going to work so down it came.  We gybed a couple of times to stay out of the incoming tide while the Div 1 fleet either sailed past or nearly sailed past.  Eventually we got the big red one into the air and made good time to the harbour entrance, where we furled the sail very early (and avoided further issues).  Ran Tan exited the harbour and turned right with Wedgetail in pursuit, a long way ahead.  We lost a couple or minutes or so relative to where we should have been.

A quick 2-sail reach, full main and medium jib to the wind factory, where it became apparent that we'd need a reef.  And then another.

From there on in, it was more or less mid-30s northerly, up to 40.  We had a brief spell of 31-32 knots halfway across which felt like a lull.  We sailed a tight reach, holding just over 10 knots boat speed, all the way across, which gave us a good lead on the rest of the fleet. 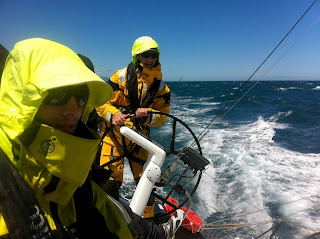 
The brains trust were aiming for a slightly south approach to Tory, as the tide usually carries boats up north.  This didn't work for us at all, we ended up needing to tack our way up to Tory entrance, where we tacked out further than we wanted to avoid an Bluebridge ferry heading into Tory.  When Bluebridge then called us on the VHF to tell us to watch out as they were exiting Tory, there was momentary confusion until it was apparent that this was Inconvenient Bluebridge Ferry number 2.  Which made us take a course right at the northern edge of the channel, out of both the wind and the incoming tide.  Once in the channel, suddenly we were in calm water, warm, and slow.  We found some patches of breeze to sneak over the line slowly, in first ahead of Ran Tan by just over 10 minutes.


We motored into Ngaruru Bay and threw an anchor over for some drying out and eating and drinking where we were joined briefly by Ran Tan and Wedgetail. 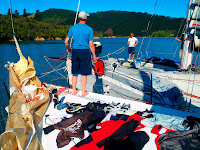 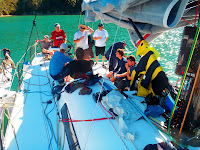 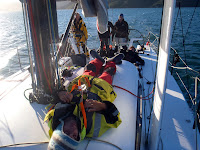 We debated whether to stay overnight and head back the next day but the overwhelming consensus was that we'd go back that evening. 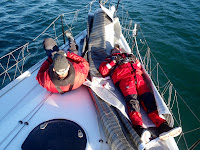 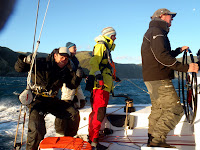 Which was interesting.  35 knots across the middle of the strait, #4 and 2 reefs, consistent mid-teens speeds and Gordie having a lovely time surfing across the second half of the strait. 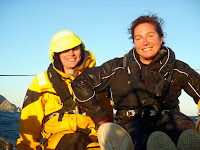 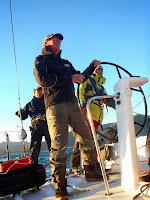 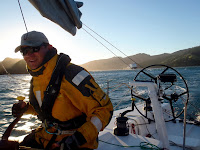 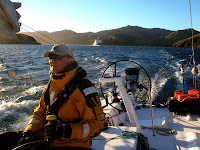 One of the aforementioned Bluebridge ferries exited Tory as we did and they weren't very far ahead of us by the time we got to Wellington harbour entrance.  We took 1 hour 20 minutes from Tory Channel to Karori light, and under 3 hours into the inner harbour.


Things got interesting in the wind factory again.  wind built to the 40s and then we saw sustained visits into the low 50s a few times.  We went to take down the jib, early in the takedown the guide line broke and suddenly we're fighting a half-filled sail, so it became a bit challenging.  Once we got it down, Blink moved along quite nicely under 2-reefed main alone until we covered the last couple of miles to the harbour entrance.  Then we decided we couldn't be bothered fighting our way into the harbour in a gale so we motorsailed in.  In about 12 knots of wind.

Thanks to Mark and Mike for the pics
Posted by Tony at 23:56